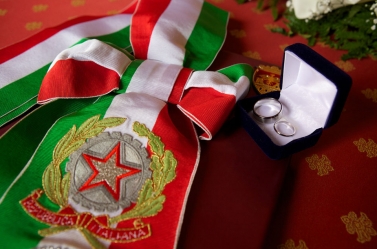 Following is the translation of the Italian Civil Wedding vows the Mayor or Registrar will read on the Civil Wedding Ceremony. You may personalize the ceremony with your own vows once these have been read.

Reciprocal rights and duties of the husband and wife.

Upon marrying, the husband and wife acquire the same rights and assume the same duties. The state of matrimony requires a reciprocal obligation to fidelity, to moral and material assistance, to collaboration in the interest of the family and to cohabitation (that is, sharing a family home).
Both the husband and wife are expected to contribute to the needs of the family, each pledging in relation to their own financial circumstances and personal capacity, relative to their profession, whether inside our outside the family home.

The address of the family home.

The husband and wife will agree together on the physical address of their home and establish the family residence according to the needs of both, and of the pre-eminent needs of the family itself.

It is within the power of each of the spouses to bring the agreed upon address, into being.

The state of matrimony requires from both the husband and wife the duty of supporting, raising and educating their children, keeping in mind their natural abilities, their inclinations and aspirations.

Now,  I invite you to answer the following questions.

After these vows, the following statement will also be read: